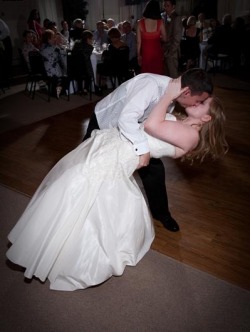 We're married!  I'm working on building a married bio, but for some pics, go check out the 'how it all turned out' section!  I also added some pictures to our HM section.

John and I unofficially met at our college freshman orientation.  I remember seeing him, and he was right out of cross country practice.  John swears up and down he doesn't remember seeing me at all.  About a month passed, and I casually mentioned to a friend, Seth, that the guy that was in our orientation was cute.  He immediately informed me that he knew him and would let him know I was interested.  I didn't have a chance at stopping Seth, and so we met later that day or the next, and I was hooked.  We've been together for 7.5 years now.

I was up in NH on vacation with my family, and John told me he wouldn't be able to come to 'family day' up there because of work. That Friday night after dark, I was down at our beach with my older brother and his fiancee, and our younger brother, Nick. We were making smores around the campfire and playing beer pong. My parents showed up, which was unusual because they hadn't joined us at any of our other beach fires earlier in the week. I was showing mom how to play beer pong when I heard John's voice. I turned around, and he had a dozen roses in his arms and a big smile on his face. I started crying immediately. He said, "It looks like everyone is here, except for one person!" And then my best friend, Emily, and her fiancee Kevin came out of the darkness. (She just moved back north after being in Alabama for two years with Kevin while he got his Master's.)

I started crying even harder at that point, and I honestly don't know much of what John said to me. I know he said that he loved me, and that we'd been together for six long years, and that it was finally time to make it official. He said more, then got down on one knee and asked me if I'd do him the honor of being his wife. Still bawling, I of course said yes. Emily broke out the champagne, and we all had a toast down at the beach. I found out later he was supposed to have gotten there around sunset to do this, but got stuck in traffic. I thought it was perfect anyway!

Our wedding will be in June 2010.  We're waiting for a while, partly because many friends and relatives got married last year.  Another reason is because our Best Man was overseas from January 2009- 2010. 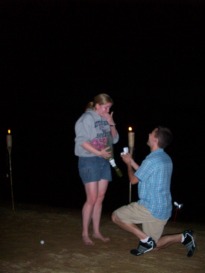 John in the middle of proposing.  I was completely and totally surpised, I had no idea what so ever that this was going to happen that night! 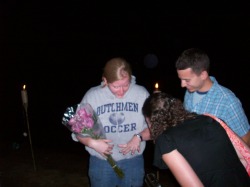 Emily checking out the bling.  We actually forgot to put the ring on my finger right away.  Em was like, wait, where is it?  Didn't you put it on?